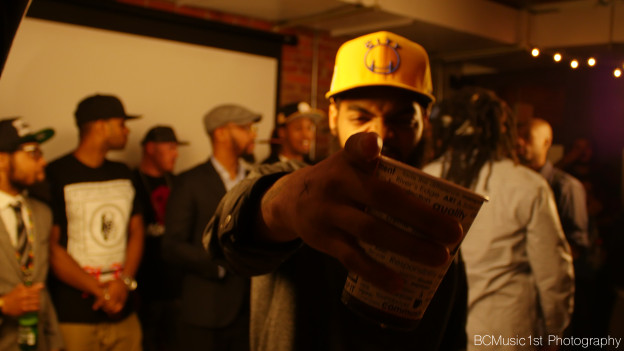 On Saturday, April 4th, Reppa Ton and I made our way to Washington DC to support the rising battle rap culture. This event was the first year anniversary for Bar Bendas Regime (otherwise known as BBR). With the event happening on Easter weekend, the traffic was CRAZY! It took us 3 hours to make it to the city but the location was prime real estate for a battle. It happened across the street from the Verizon Center in a “loft” environment. Food was close to the venue and there were no interruptions with noise complaints due to the city setting. I’ll give them credit that this was the most comfortable battle event that I have attended since coming back into this realm of art.

While the card was initially set to be action packed, there were MAJOR battles that did not happen. Gwitty, Prez Mafia, Dot and Pharoah were unable to attend. As of this report, Gwitty was being held in custody while Prez Mafia has been MIA after allegations of bar plagiarism. I haven’t seen any update from Dot but Pharoah was able to clear things up with the staff offline. Hopefully all of these battles will be rescheduled (Gwitty vs Tre Awthenicc, Prez Mafia vs J Law, Pharoah vs Dante, and Dot vs Haixian).

Before the battles began, Spanish Harlem commemorated a supreme supporter of the culture, Win Talley with an official BBR figure. I’ve never seen anyone give back in this manner and I’m sure it was special being that Win was not expecting any token of appreciation for what he has done.

I’ll give my recap of how I felt on the battles once the footage drops but I’ll give the rundown of the battle order in the venue: LJ Heiss vs Ghetto Fama – Moon vs Teak – GQuban vs Jizzle – Vito Cognac vs AP – Ha Style vs Moxxie Valor (?) – Drugz vs Barry Bandz – Billy Bars vs JMorr

I have the question mark next to Ha Style vs Moxxie Valor because this was the only battle I missed in it’s entirety. That’s partly due to the awkwardly ambiguous street signs in area. Towed vehicles are not my idea of a good time!

Take a look at some of the photos from the event and feel free to share them around! Stay tuned to BCMusic1st.com as I will be doing write ups on each battle from the event as they become available!